My family is celebrating my brother’s upcoming marriage with a small, outdoor wedding. But, I wanted to share the recipes for what we’ll be eating with you, so that you can recreate those flavors at home! So follow along with Chef Jon in the video above (or on YouTube HERE) or by following the recipe below, as we make Pistachio-Coconut Crusted Salmon with an Arugula-Pistachio Pesto and Grilled Corn, Tomato and Avocado Salad. Perfect for a summer celebration!

While everything is going on, even a quick run to the grocery store has become a great feat. So, it seems like a great time to use up those items in your pantry. Something that I almost always have in my cabinet? Canned tuna.

Now, I too love a great tuna sandwich, but tuna salad gets boring after a while, amirite? Enter “Tuna Pasta Puttanesca” — this hearty, comforting pasta dish pulls double duty as not only a delicious dinner, but also uses up ingredients you might not have even remembered you had! Tomatoes, olives, capers, and our star ingredient, TUNA, make this easy meal a crowd pleaser and it’s packed with protein so will feed about 4 or 2-3 very hungry people!

I love coming up with new ways to cook with some of my favorite ingredients, especially comfort foods. To me, a big wok full of curry is super comforting and was one of the dishes I made all the time when I moved into my first solo apartment. It’s warm, earthy, spicy and makes me feel good all over. Plus, it’s amazing for leftovers! So, when Mama Lam’s, a local food vendor making and selling their own Malaysian Curry Paste that I had the pleasure of meeting at the annual Queens Taste, event contacted me about partnering up, I was excited. I couldn’t wait to try cooking with their homemade, Malaysian curry paste and curating a couple of dishes to use their product in. 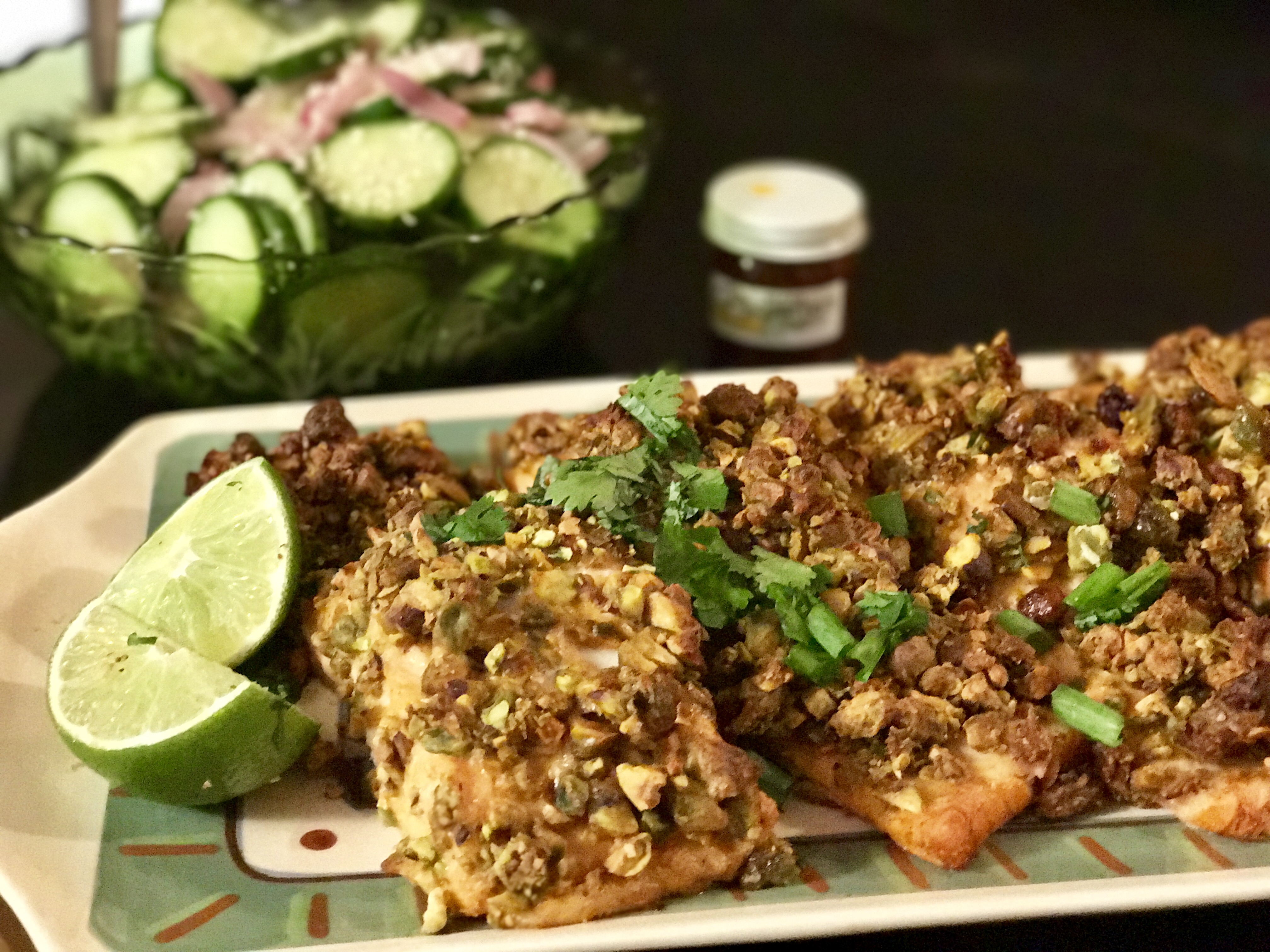 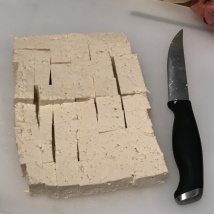 Enjoy these dishes together with a Spicy Asian Cucumber Salad for a fabulous Southeast Asian inspired dinner at home.

To watch the cooking demo for these recipes, click here or watch below.

The Pacific Northwest is known for some of the freshest seafood in the world—it’s a fish lover’s paradise. In fact, at the famous Pike Place Market in downtown Seattle, many of the fish mongers will be happy to “throw the fish” for visitors, and I even got to sample some delicious and super fresh smoked salmon! Therefore, it was a no brainer on what kind of food I wanted on my first night of a foodie weekend in Seattle—seafood! At the same time, I wasn’t in the mood to walk very far and found Shucker’s, which had great reviews on both OpenTable and Yelp and was only a 5 minute walk—I was sold.

Located inside of the landmark Fairmont Olympic Hotel, Shucker’s seemed like an old school seafood joint with a heavy focus on fresh fish. The aroma of some sort of baked seafood dish—maybe Oysters Rockefeller?—hit me as I walked in the door with an amazing garlic smell. It was sweet, salty, briny and so tantalizing. As I sat at the table, I had a good view of the chalkboard where that day’s market pics were listed—another nod to old school seafood houses—and got comfy on my side of the booth. 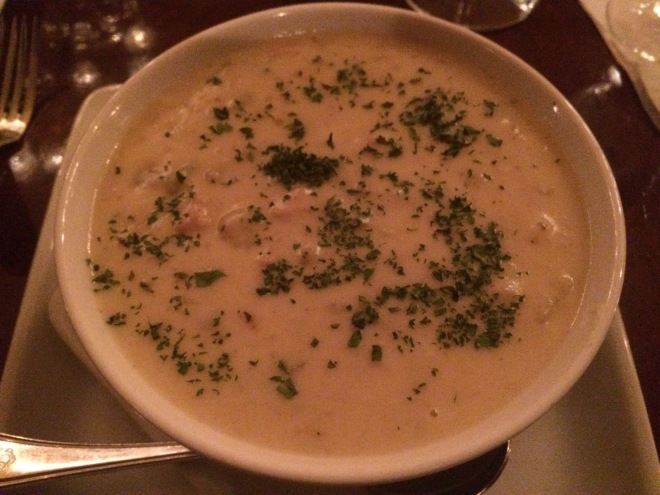 The bread basket was bountiful, though not the best bread I’ve ever had. The white sourdough had a subtle tang, the whole wheat was nice and fluffy, and the cracker had a good amount of black pepper baked in. The butter was delicious though, and super creamy. The breads were great for dipping in my huge bowl of Creamy Clam Chowder ($12). Accompanying the soup was a mid-sized beer mug of oyster crackers, which I thought was a nice touch, albeit a little weird. The soup itself was creamy with a nice velvety texture, and uber-filled with fresh, chunky clams. I think a lot of the creaminess came from the starchiness of the potatoes, as opposed to a super amount of cream, which kept it from being too heavy. The whole bowl had an undertone of seafood flavor from the clam juice and it was a great way to ease into a seafood dinner. The waiter’s designation of it as a house specialty was spot on. It was very filling with such well cooked clams, but I soldiered on to the next courses.

Up next was the Dungeness Crab and Artichoke Gratin ($17). This dish seemed a little different from the oft-ordered shrimp cocktail or crispy calamari that are so common at fish restaurants. Compared to the chowder, this appetizer was much more petite, but with a beautiful presentation. The gratin had big chunks of chunky crabmeat juxtaposed with the salty and tangy artichoke hearts. The top crisped up under the broiler and gave it some nice texture. It was garnished with a long, thin focaccia crisp, which was tasty but I wish was slightly chewier. It was a great vehicle for shoveling more crab and artichoke creaminess into my mouth though—so mission accomplished! 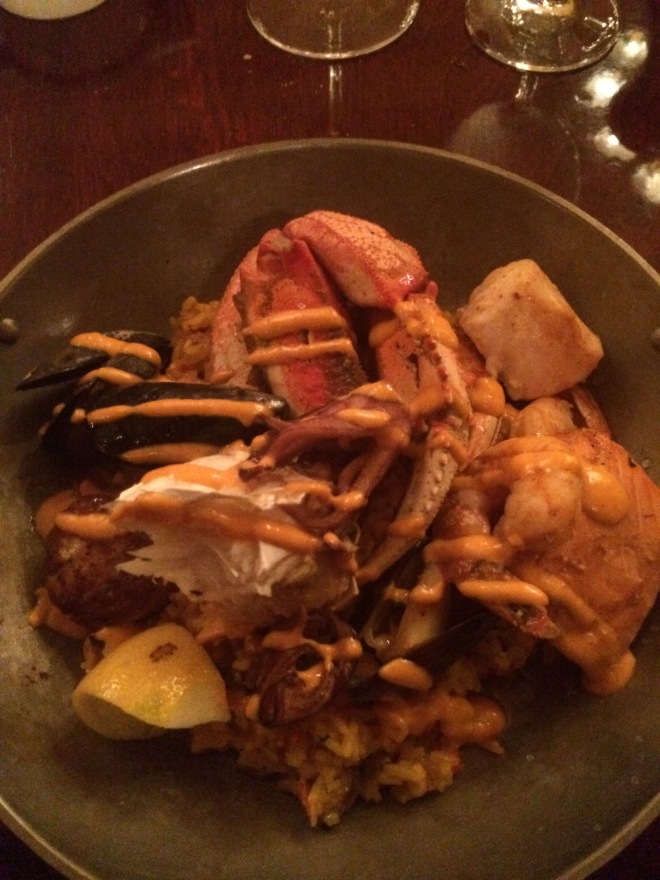 Finally, was the main event that I had been waiting for—and salivating over—since I saw it on the menu: Shucker’s Seafood Paella ($41). Though it looks like a pretty steep price tag, there is so much seafood in this paella, and it was so delicious that it’s worth it. Plus, my waiter was so nice that he substituted a big scallop for me instead of clams in the paella, since I’m not a big fan of clams in their shell (plus already had clams in the soup). He didn’t even give me an up charge! To go through the long list of seafood in this dish, we can start with the huge quarter of a Dungeness crab atop the bowl, along with some crabmeat running throughout the rice. The crabmeat—after I used the seafood cracker to break the shell—was nice and sweet, and gave this dish such a level of elegance that many paella dishes are missing. The prawns and scallop were perfectly cooked—juicy and moist on the inside, with a slight acidic crust. The scallop specifically was gigantic with a wonderful, slightly acidic char on the outside. This dish also had plenty of meaty calamari flavor bombs and fresh, delicious mussels that absorbed flavor from the traditional saffron paella broth. The chorizo, chicken and andouille sausage were rendered down, and lent this dish a nice level of spice and bumped up the meatiness of the creamy rice. The saffron gave it not only a wonderful red-orange color but a depth of flavor that helped bridge the gap between the seafood and meats. Served in a mini-paella pan with a wedge of lemon to squeeze over the top, this dish was awesome, and such a great way to try a variety of fresh seafood in one dish.

Unfortunately, at the end of this deliciously decadent and unbelievably rich meal, there was absolutely no room left for dessert, though they sounded delicious. Regardless, this dinner was absolutely amazing, and the perfect gateway to the plethora of fresh seafood available in Seattle, and a wonderful “stick to your ribs” meal. I also have to mention that the servers at Shucker’s were very knowledgeable about the menu and attentive throughout the night. So, next time you visit Seattle and want to sample the bounty of the Pacific ocean, I recommend a pitstop at Shucker’s Oyster Bar! And, if you want to make your own fish dinner at home, check out my recipe for Sesame Crusted Tuna with Peanut Noodles 🙂 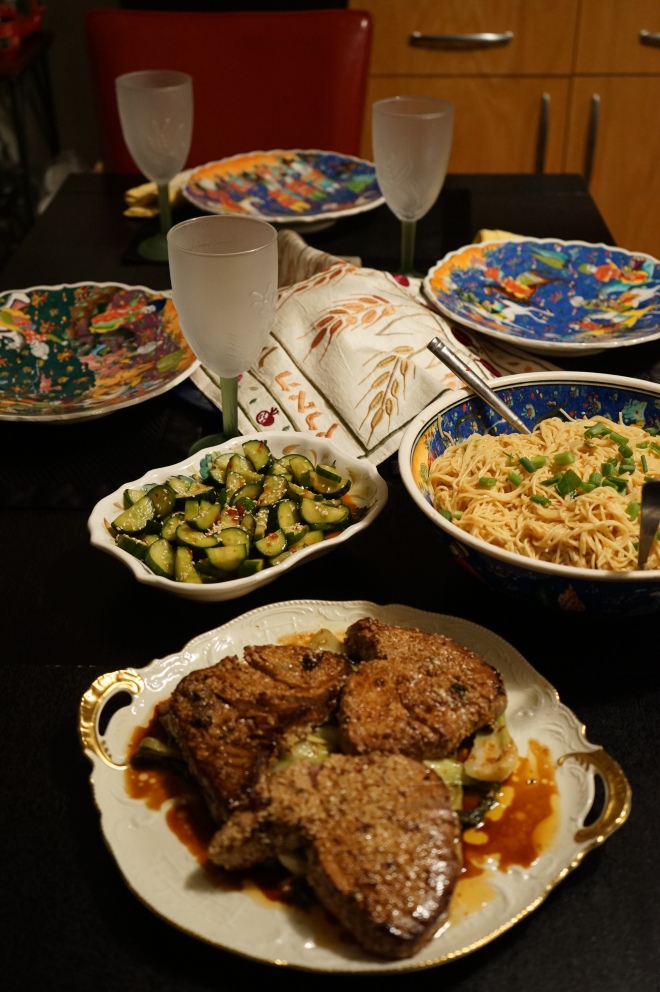 Having eaten such fresh and delicious seafood in Seattle a couple of weeks ago, especially at Shucker’s, I was inspired to make my work fish dinner at home. Everything that comes out of kg kitchen has a twist though, so here’s my idea of a delicious fish dinner for company or family. Sushi grade tuna is marinated in a salty, spicy mix of soy, ginger and chili, then crusted in sesame and seared. To go with the tuna is a spicy cucumber salad, and peanut noodles that are so easy to make, you’ll be wondering why you’ve ordered them from takeout all these  years.

This is a wonderful meal to serve for dinner to your family–like I did–or use it to wow your dinner guests as you take them on a culinary tour of Asia. Leftovers from all three of these dishes will taste even better the next day!