Shake Shack is a burger chain that’s modeled on a traditional drive-in. All of its locations have tasty burgers, hot dogs, frozen custards, milkshakes, and Shack brand beer. I came here the other day with some friends and left very full after a great meal.

The Shack Stack ($9.49)* is my go to pick when I visit Shake Shack. There’s just something about the combination of mushrooms, cheese and meat that calls out to me. Specifically, the Shack Stack consists of a cheeseburger patty, topped with a ‘shroom burger, lettuce, tomato and shack sauce. They toast the inside of their hamburger buns, which are buttery potato buns of course. The buns are nice and sought in the outside, and ready to absorb juice on the inside with a great mouthfeel as you bite in. In addition, Shake Shack uses their own customized Angus beef blend from famous butcher, Pat LaFrieda, though the specific cuts and meat-to-fat ratio is a closely guarded secret. This fat is important because they cook their burgers on a wide griddle; as soon as it hits the flat top, the patties are mashed thin, and the fat not only greases the griddle, but helps the outside of the meat caramelize and develop a delicious crust. Plus, they use a cold patty, which makes sure that the burger juices stay inside as the fat starts to rapidly melt from the heat of the griddle. They let the crust develop before flipping too—so much flavor! The ‘shroom burger is their version of a veggie burger; it has a whole Portobello mushroom, which is filled with muenster and cheddar cheeses, breaded and fried until crispy.

Speaking of flavor, this sandwich is delicious! As you take your first bite of the burger you go through the fluffy bun and your teeth sink into the seared meat and break open the mushroom patty. You get a little bit of crunch from the lettuce, the ‘shroom patty starts to ooze cheese, the burger juices begin to run down your hands, you get the creaminess of the shack sauce and the buttery goodness of the bun. Thank god the tomato is there to provide a burse of freshness and cut through the decadence, lol. This burger should be saved for special occasions every day. In fact, this burger is its own special occasion! Just bring a lot of napkins to your table.

The ShackMeister Dog ($4.00) also made an appearance in my stomach on my most recent Shake Shack visit. Shake Shack actually started out as a hot dog cart in New York City’s Madison Square Park in 2000. This hot dog comes topped with a cheese sauce made from Shack cheddar and American cheeses, and crispy ShackMeister Ale marinated shallots. The dog was split and griddles so it had a nice snap, and also meaty chew. The shallots have a subtle onion flavor that doesn’t overpower the dog, and the cheesesauce is velvety and coats your tongue as you take a bite. This hot dog is rich and satisfying—not your ordinary cookout dog—and could be a meal on its own. Mustard isn’t necessary, but gives it a nice tang and a sharp bite that helps elevate the aromatic flavor of the fried shallots. 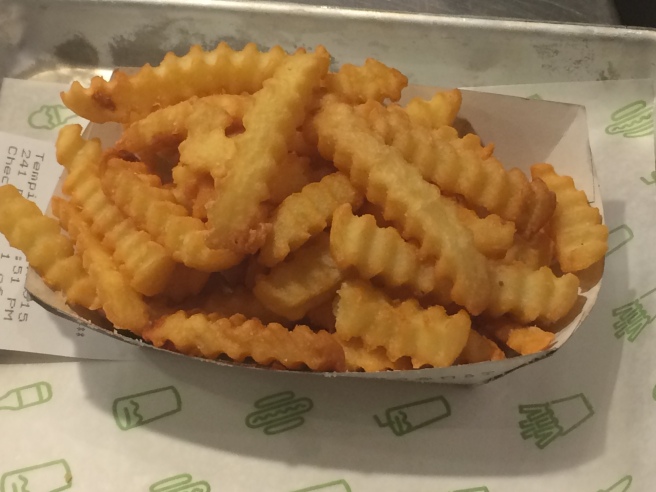 To round out the meal, I munched on some of my friend’s Fries ($2.95). Shake Shack fries are made from Yukon potatoes and are crinkle cut. They’re seasoned with salt, crispy and delicious. These fries make Nathans’ fries look stupid. The only thing that makes these fries better would be some cheese sauce for an extra $1. The restaurant has ketchup and mustard dispensers in the back with little cups for dipping. If you ask nicely though, they might give you a mini-cup of the Shack Sauce to dip your fries into instead!

Grade: A-
The Shack Stack burger would’ve gotten an A, if not for the price. The burger itself is actually kind of small for the hefty price tag, so it loses a few points. It’s definitely still worth it for the taste, and quality of the ingredients. Overall, delicious and always worth another trip!

* Prices listed are for the Philadelphia – Center City location.

Behold the humble burger. Everybody loves a burger, all over the world. Why? One theory–my own–is that a hamburger is a cheap way to crave our carnivorous appetite. We want meat! Having the experience of biting into a meaty burger, chewing through the beef, juices running out of the patty, the texture of the bread, is an (almost) divine experience.

Feeling inspired by my recent gastropub night at home, in which I made a bistro style, French Onion burger, I’ve decided to search for great burgers around the city. Philadelphia might be best known for cheesesteaks and hoagies, but there are plenty of places–hidden or not–that offer a great burger experience. I hope you come with me as I search for the best local burger in my Philly Burger Round Up series.