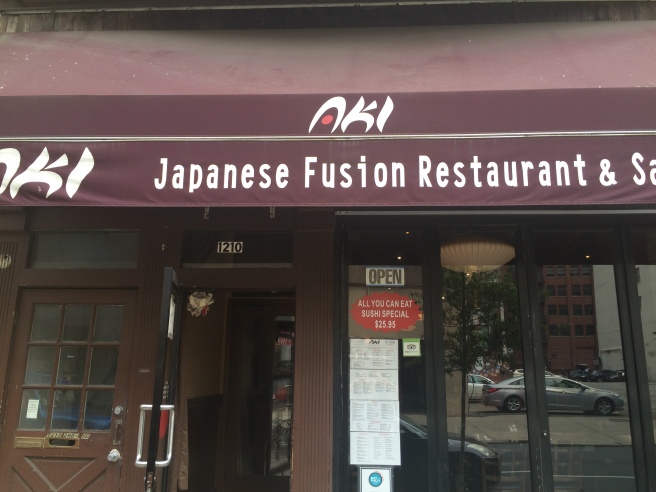 I had just left the gym and was feeling Hungry…with a capital H. I thought, what could I eat that would not only fill me up for the day—or a week!—but not necessarily weigh me down. The answer was obvious: sushi. Aki Sushi is located in the Midtown section of Center City, also known as the Gayborhood, and has been open for over six years. When I’m hungry, I stop in for their All You Can Eat sushi special for $26.95. The all you can eat menu is extensive with a large selection, and everything brought out when it’s ready. The service is great, and while it might be slow, all of the food is fresh and delicious. 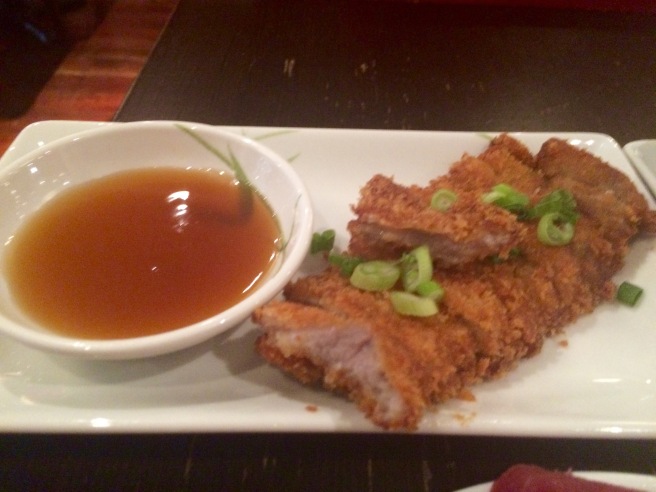 I started off with the Pork Katsu appetizer, which was a bit on the small side, but in context, didn’t need to be a large plate—there was a lot of food coming my way! The pork cutlets were fried super crisp and stayed juicy. They were not too greasy, but could’ve used a bit of salt. The dipping sauce was not too sweet and it was a nice way to start off the meal.

The very popular Sashimi Appetizer comes with six pieces of sushi grade fish selected by the chef. My plate came with three plump pieces of brightly colored salmon and three opaque tuna slices. The sashimi was very fresh and cut into thick pieces, which gave them a meaty texture and the cold, but not frigid temperature allowed the delicate flavor to shine through. The shredded daikon garnish was not only very classic, but also served as great absorption for extra soy sauce.

The next dish to come out was the Gyoza, or Japanese dumplings. Dumplings happen to be a personal favorite of mine, and I’ve eaten them in so many places that I always look forward to them. The gyoza were pan-fried and greasy in a pleasing way—especially with all of the smooth fish. The filling was made up of meaty, minced pork and paired with an acidic, vinegary dipping sauce. The dough was cooked perfectly and the sauce helped cut through the heavy filling without overwhelming the simplicity of the dish.

Wanting to try some more fish dishes, I ordered the Spicy Spider Roll and the Shrimp Avocado Roll. The spicy spider roll was a bit of a departure for me since it was a cooked roll, but I always like to try new things and it came recommended by the waitress. The roll was filled with soft-shelled crab, which was nice and crispy after being coated in a tempura batter and deep-fried. The roll as a whole had a good level of spice to it, and the spicy mayo wasn’t too overpowering in either creaminess or heat. The nori wrapper was exceptionally chewy—in a good way—and slightly warm from the heat it absorbed from the freshly fried tempura. There was a great textural contrast when I bit into the end pieces and got to experience the full-on crunch as the crab spilled out the sides of the roll. The Shrimp Avocado Hand Roll had seemed like a plain choice, so I opted to shake things up a bit by ordering it as a hand roll. A hand roll as opposed to a regular maki roll is cone-shaped,  and the filling and rice are packed into the cone in what seems to be a greater quantity, though it is only because the roll is shorter. In addition, it is not as thin as a maki roll or as tightly rolled. The roll was actually (surprisingly) delicious. The sushi chef used whole shrimp, and not cut up pieces or shrimp paste, and allowed for a wonderful mouthful of perfectly cooked shrimp. In addition, there were big slices of avocado that lent a good freshness to the roll. The roll was also wrapped tightly enough to keep it together, but ate more like a wrap sandwich than a traditional sushi roll.

The Chicken Yakitori appetizer arrived at the table piping hot and freshly cooked. The meat had a slightly crisp exterior and was still moist, though it—at first glance—seemed like it might be dry. The dish wasn’t drowning in sauce, so you could taste the chicken and it was a nice break between various forms of sushi. The fact that it was hot was also a nice change-of-pace from the cold fish.

The meal was rounded out by a trio of maki rolls. The Aki Tempura Roll was unique in that it wasn’t the filling that was fried, but the whole roll was lightly fried giving it a slightly greasy, but also crispy exterior. This roll probably had the most beautiful presentation of the meal; it looked like it was overflowing with the blue crab topping, and a lot of fish in the center. The crab topping gave this roll a decadent creaminess, especially with the tempura outside. The Rainbow Roll, though, was very fresh, and the cold temperature stood in stark contrast to the warm tempura roll. The roll was topped with avocado, and each piece alternated between a salmon or tuna garnish. Sliced cucumber inside the roll gave it a needed crunch factor with the softness of the fish and avocado. The final roll of the day was the Sweet Potato Roll. I’ve had various versions of sweet potato rolls, and though this roll wasn’t very unique– The soy sauce and wasabi are necessary to help flavor it—it was still tasty. The sweet potato was soft but not mushy, and lost some of its starchiness after being cooked. It also helped clear the palette after such a fish heavy meal.

The sushi at Aki is top notch and absolutely delicious. Come here hungry, and leave happy. Just make sure you take the time to enjoy the meal–I promise, you’ll love it!