I have this fellow foodie friend, and we try to go out to eat somewhere unique every few weeks. We were supposed to go out to Zahav restaurant, but she had accidentally made the reservation for the following week instead of that night (look for a review of Zahav in a few days!). So we were walking around the Penn’s Landing area, when I suggested we go to FARMiCiA on North 3rd Street, a farm-to-table restaurant in Old City. I had actually been there a couple of times for brunch, and both meals had been great. So, we walked over and were able to get a great table next to one of the restaurant’s large front windows. The Farm, as it is called on their website, is all about great tasting food and drinks that are locally sourced, artisanal and organic. The inside of the restaurant is almost a blend of warehouse modernity and farmhouse comfort. There are big windows to let in lots of natural light, and the tables are decorated simply, but elegantly. The real stars here are the food and service.

After all that walking around Old City—searching for a replacement restaurant—we were pretty hungry and decided to split an appetizer. I had remembered having some great cheese here once, so we ordered the Trio of Cheeses ($13) starter.  The cheeses were served on a large square white plate with some pickled cauliflower as a garnish. The cauliflower provided a wonderful lightness contrast to the heaviness of the plate, as well as a great crunch. The first cheese that I tried was the cheddar, which was delicious. Not too strong, but worked very well with the fruit chutney. The chutney had, I believe, tangy sour cherries that helped cut through the rich cheddar. The next cheese was a bold feta that gave a punch of briny flavor, somewhat echoed by the pickled component of the dish. It paired nicely with the simple red peppers. The final cheese was a creamy, salty goat cheese that I ate along with some sweet and juicy red seedless grapes. Of course, there were some nice breads (and even housemade matzah since it was still Passover at the time) to go with the cheeses. Two of the developers behind FARMiCiA are the owners of the Metropolitan Bakery chain in Philadelphia. The plate came with a toasted crostini and some soft, chewy sourdough—both stood up well to the cheeses.

The entrees were up next. I ordered the Yellow Fin Tuna ($21.75), which was absolutely delicious. The fish was perfectly cooked at rare/medium-rare, and served atop a chickpea purée that definitely evoked hummus-y flavors. It actually reminded me of travels in the Middle East. The spinach was lemony and slightly floral, with a subtle saltiness in the background. It wasn’t overcooked or mushy, so it gave some crunch as a textural contrast to the plate as well. The tuna medallion had a nice sesame crust, with a hint of acid and smoky flavors, but wasn’t overpowering. It lent a subtle aromatic flavor to the dish and tied in well to the chickpeas. The chickpea purée was meaty and heavy, and still semi-chunky—I love when purees aren’t super smooth so you know what’s in it! In fact, our waiter was really nice and asked the chef for me what was used to flavor the puree: saffron, coriander, cumin and garlic. There was a simple garnish of picked peppers served on top of the fish that not only cut through the heavy puree, but also highlighted the individual flavor profiles within it.

My friend opted for a more carnivorous option of Grilled Skirt Steak ($24). The plate presentation was very elegant, with the melting herb butter on top of the steak as the centerpiece. The mashed potatoes were rustic with a subtle cheddar flavor, and not too overpowering. My friend didn’t eat much of the potatoes, but I thought they were delicious, especially with the sauce! The broccoli still had a good crunch and maintained its bright green color, but the charred aspect was sort of lost in comparison to the rest of the plate. The steak itself was super tender. Major kudos to the chef, since skirt steak is usually a tough cut—we used to use it for fajitas in my house growing up.The meat was filleted very well, with a nice sized portion,  andwas had a perfect medium temperature on it. The accompanying demiglace was delicious, and really soaked into the meat. They chose to serve the dish in a large oblong bowl, which was a goodchoice since it kept the sauce in the middle of the plate. The dish was essentially a Modern artisanal take on more traditional meat and potatoes. For some reason, it jumped out at me as an amazing version of meatloaf, mashed potatoes and broccoli that I ate growing up.

Since the meal was so good, and didn’t feel super heavy in our stomachs, we decided to order dessert as well. The Rich Bittersweet Flourless Chocolate Torte ($7) did not disappoint. The cake was super dense with an almost truffle-likeconsistency. It was very rich, and since it was made with bittersweet chocolate, it wasn’t cloyingly sweet. The torte came with house made mint chocolate chip ice cream. The ice creamtasted a little more like a palate cleanser than an ice cream, but was still delicious. The chocolate chips in the cream were great full sized chips, as opposed to pieces, and the cream was very smooth with a great mouth feel. The light ice cream and very heavy torte made for a nice balance of textures, and also made up for the (maybe) light meal. My only complaint would be that I didn’t sense much of the mint flavor in the ice cream, though my friend tasted it. The torte also would’ve been fabulous served hot, especially paired with the cold cream. Yum! 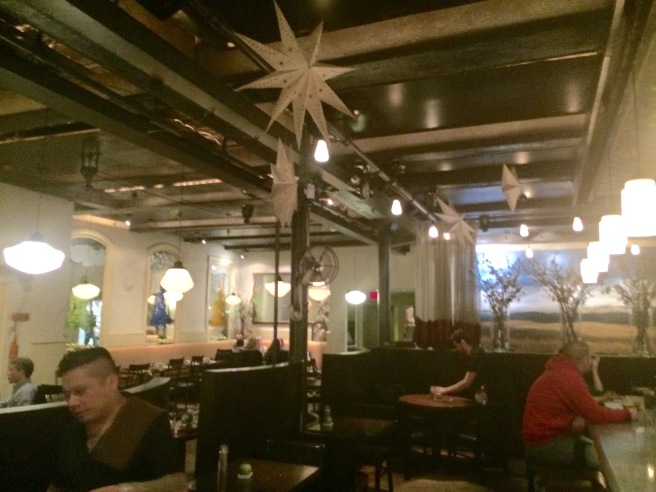