I recently returned from a visit to Israel. The trip was amazing and we did so many great activities – rafting in the Galilee River, riding ATV’s in Golan Heights near the Syrian border, partying and relaxing on the beach in Tel Aviv and much more. However, my favorite part of the trip was the delicious food that we had. Everyday there was a big spread at breakfast of salads, breads, fish, cheeses, yogurts, bourekas, and juice. The large Israeli breakfast is well-known and filled me up for lots of activities throughout the day. Yet it wasn’t just the breakfast that filled me up. Israel has become hotspot for a growing food scene. 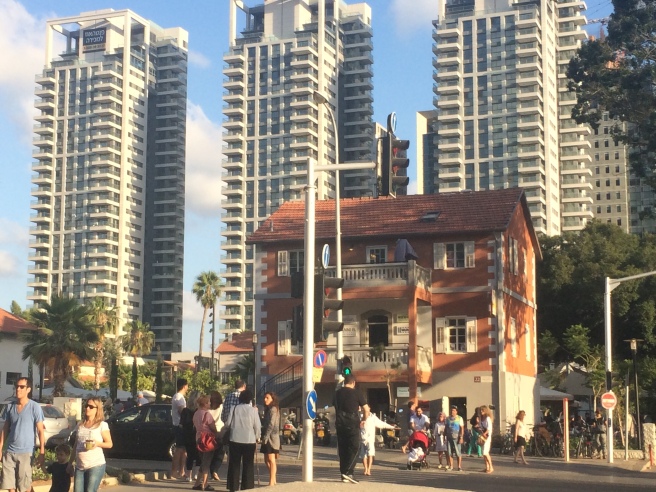 Nowhere is the growing culinary movement more prevalent than in Tel Aviv—the cultural capital of Israel. Tel Aviv is part beach town, but also had a big downtown area that is reminiscent of San Francisco. Plenty of young chefs come there to cut their teeth and open some amazing restaurants. 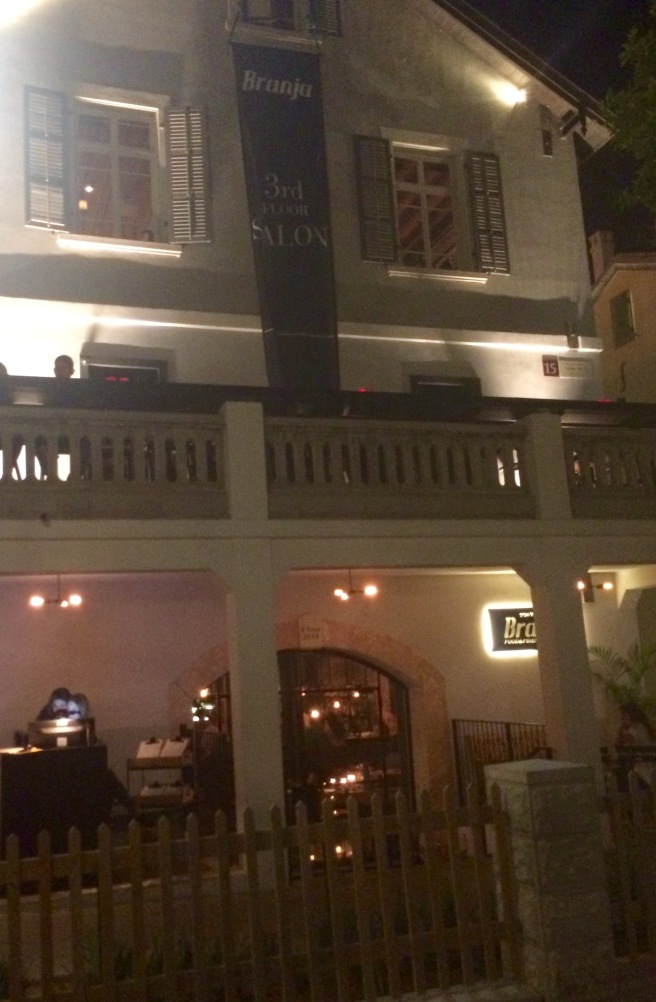 One such restaurant that I had the pleasure of dining in was Branja, in Tel Aviv’s super trendy Sarona complex—a blend of historic Tel Aviv architecture, modern urban green space, and a mix of stores, cute cafes, and hip restaurants right in the middle of the city. Even better, many of the restaurants, bars and cafes are open on Shabbat (Friday night/Saturday day). Branja is a Spanish-Mediterranean inspired restaurant, housed in a two-story Templar building that allows for a vibrant first floor restaurant, and a night bar and private dining space on the second floor. Since I was part of a big group, we had rented out the upstairs area, which was a treat—especially the wonderful terrace.

We started the night off with a wonderful happy hour—waiters offered flutes of effervescent champagne, glasses of spicy red wine, and mugs of crisp, cold beer. There was a cute lounge bar in the salon with drink refills and they were very accommodating for our large group size. The dining room had a very rustic chic feel to it, with large, rectangular wooden tables set simply with ceramic plates and glass cups.

Our meal began with a simple salad of peppers, tomatoes, feta cheese, and cucumber in a light dressing made with fruity olive oil. Not only was the salad fresh and light, but also so pretty to look at with bold colors. There were also big baskets of freshly baked bread—white or wheat—served with creamy butter and house made schug, a traditional, spicy Israeli condiment made from hot peppers. The mix of the slightly sweet yet salty butter and the spicy schug spread on the bread made for a wonderful pop of flavors in my mouth. It was complemented nicely by some briny olives. 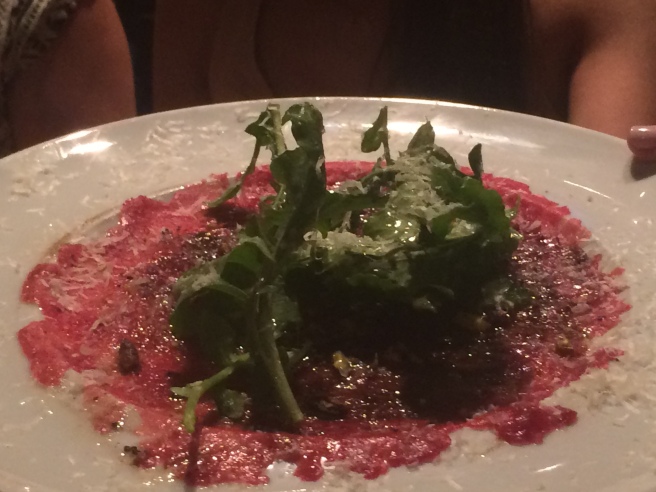 Next up was a plate of thinly sliced Sirloin Carpaccio. The beef was flavored with aged balsamic vinegar and pistachio to give it a nice punch of acidity, as well as an earthy flavor, and garnished with some peppery arugula that helped balance the richness of the meat. 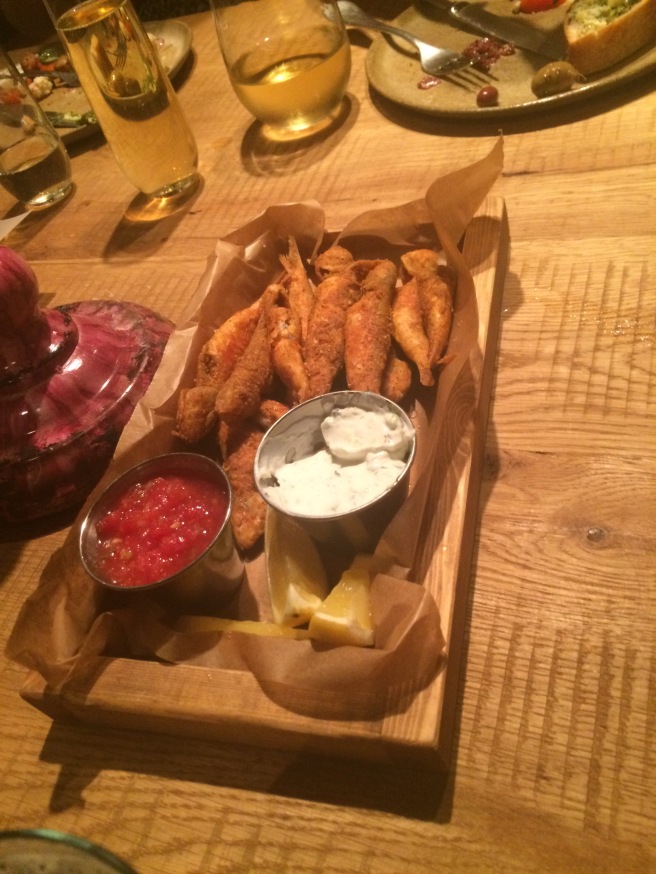 To follow, we had some fried red mullet with a crispy coating, served with a Tzatziki and a tomato salsa reminiscent of a cocktail sauce. The fish was moist, and the bones were so small that you were able to bite right through them and eat the fish whole if you like. A plate with a large potato and cheese pancake arrived as well, which was tasty but didn’t strike me as super Mediterranean in nature.

My favorite appetizer of the night were the lamb pierogies. The pierogi were pan-fried with a nice crust and a savory, slightly smoky lamb filling. They were garnished with a pan sauce and plated on a black plate which made them look even more enticing. 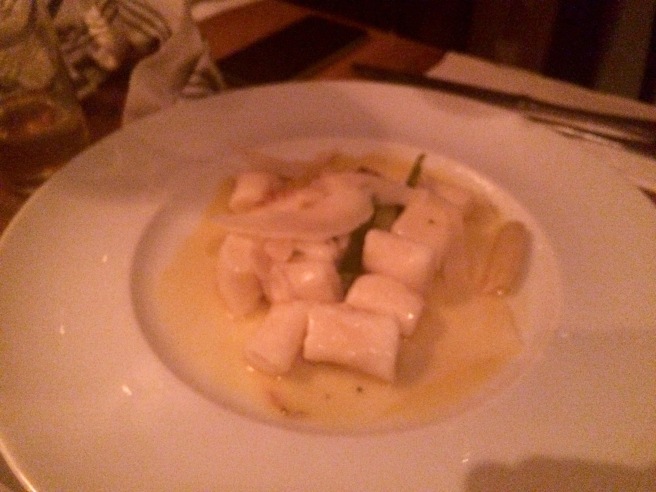 We had finally arrived at the main course, and had a choice of gnocchi, chicken or ram–which many of us assumed was lamb at first. The gnocchi was served in a white butter sauce that was mild in flavor, but was nicely garnished with long pieces of Parmesan. The mini-dumplings were cooked al dente as to maintain a good bite without being mushy. They were also tossed with some asparagus that really woke the flavors up and helped cut through the richness of the sauce. My only complaint would be that I wish the potato in the gnocchi was incorporated a bit more. 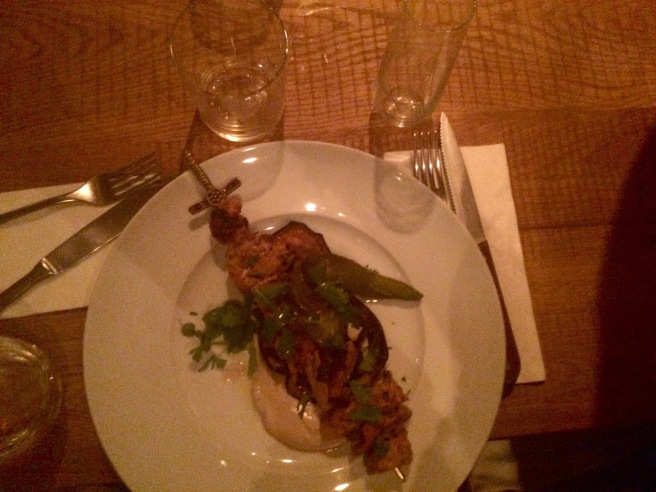 The second option available was for a chicken kabob, which was marinated in Middle Eastern spices, including cumin, garlic, za’atar, and harissa. The chicken was skewered and cooked perfectly. It was moist, and the chicken had a spice crust that helped seal the juices in the meat. It was plated with roasted eggplant and tahini. A popular cooking method for eggplants in Israel is to cut the vegetable in half lengthwise, then roast it until the flesh becomes super creamy and delicious. This eggplant was dressed with tahini sauce–made from sesame–and was a nice contrast in flavor to the bold poultry meat.

The final choice of entrees was ram steak on a stick. This was actually my first time eating ram, and, although we had to wait a little extra time for it to be prepared, it was very tasty! The meat wasn’t too chewy and had wonderful grill marks and was cooked somewhere between medium-rare and medium. It was plated with spicy, peppers, a generous amount of roasted potatoes, and demiglace.

After our large meal we, of course, needed a delectable dessert, and Branja did not disappoint. We were presented with a trio of desserts. The creamy, mini cheesecake almost had a key lime pie flavor. It was not too tangy or sweet, and absolutely refreshing–especially following such a heavy meal. The lime crumbs on top were a nice touch. The plate also included some wonderful churros that were crisp on the outside and fluffy in the middle. They emitted an amazing cinnamon aroma and were served with a bittersweet, dark chocolate dipping sauce. The final pastry of the trip was a dense chocolate cake square with nougat. The cake was intensely chocolatey, but not super sweet. It was delicious, but my favorite part was actually the house made whip cream.

Overall, dinner at Branja was absolutely delicious and such a great taste of the local, Tel Aviv food scene. We followed up our meal with a wonderful wine tasting at Tasting Room, also in the Sarona complex, and went back to our hotel that night with our bellies full and having had a wonderful night. Check back for posts on “What I Ate On My Israeli Vacation.”

One thought on “What I Ate On My Israel Vacation”