New York City is expensive—there’s no arguing with that. However, it is still possible to dine out at delicious restaurants while sticking to a budget. One of the best times of the year to sample the city’s plethora of eateries is NYC Restaurant Week. Over the course, in actuality, three weeks, over 300 restaurants throughout the boroughs create special three-course menus ($25 for lunch, $38 for dinner) in addition to their regular offerings. It’s a great way to try a new place or enjoy a high-end meal, for a more affordable price tag.

We ventured down to Bedford Street for some modern Mexican fare at La Loteria. The name of the restaurant is a play on the popular Mexican game, la loteria, which is similar to bingo. While the game might be based on luck, the food and service here are always a sure bet. Under the creative helm of co-owners, Executive Chef Julieta and Managing Partner/Owner Jaime Herrera, La Loteria has become a hotspot in the chic dining scene of the West Village.

Our night started fittingly with some classic Mexican cocktails—margaritas and sangria. The Margarita Tradicional Loteria came in a glass tumbler garnished with a salt rim. It was tart, with a good balance between the heavy tequila and sweet agave nectar, and super refreshing–really hit the spot. The red Sangria del Cantarito wasn’t too sweet and we appreciated that it didn’t come with a whole fruit basket as a garnish. It was no frills, but made with a good wine and tasty.

The Guacamole Tradicional was served in an authentically Tex-Mex stone bowl, which I love and came with a generous portion. It was chunky, so you could still taste the individual pieces of avocado, and mixed with hot chili peppers, juicy tomato chunks, highly acidic lime juice, and rough chopped cilantro that was still visible throughout the dip.

We also got a trio of salsas for the table. These salsas seriously heightened La Loteria from solid Mexican food in NYC to modern and gourmet. The tomatillo avocado salsa was sour from the fleshy tomatillos with a wonderfully bold flavor. It was pulpy from the tomatillos, and strongly acidic, with a nice bite, that was tempered by the creamy and rich avocado. The vibrant green color was also great. The peanut salsa was definitely funky and tasted like a Mexican version of an Asian sate sauce. The sauce was earthy, slightly spicy, nutty with some smoky notes to it, and garnished with chopped peanuts. Yum! The third of the trip was the more traditional chili de arbol salsa. The bright reddish-orange color contrasted beautifully with the green of the tomatillo salsa. It was also super creamy and unctuous, and had a background taste of roasted red peppers. The building heat from the red salsa played nicely with the hidden spiciness of the guacamole, and the mild taste of the peanut salsa.

To scoop up the guacamole and salsas, there were homemade corn tortilla chips. The chips were crunchy and still warm from the fryer, but not greasy. We ended up getting a second bowl of chips since they were so dippable. 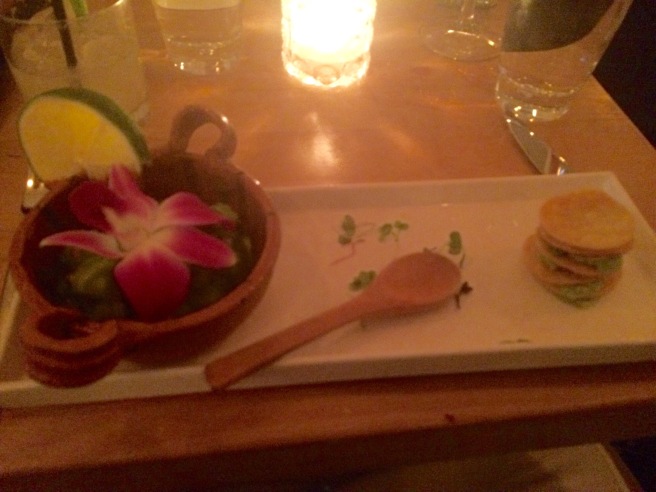 The Ceviche de Pescado appetizer featured the catch of the day, which was sea bass, a meaty fish that has steadily been gaining popularity as an alternative to tuna or salmon. Sea bass was a great choice for the ceviche, since it can stand up to the strong flavors in the marinating liquid. The fish was mixed with tomatillo, avocado, and pickled cucumber. The base sauce was made with lime juice, but wasn’t too overpowering. The plate was garnished with mini corn tostadas, pea shoot tendrils and an edible flower—the flower seemed to be a theme, which is popular among many Mexican restaurants. It had a very rustic chic feel to it, and the freshness of the sea bass, almost sushi-grade in its texture, really heightened the flavors. 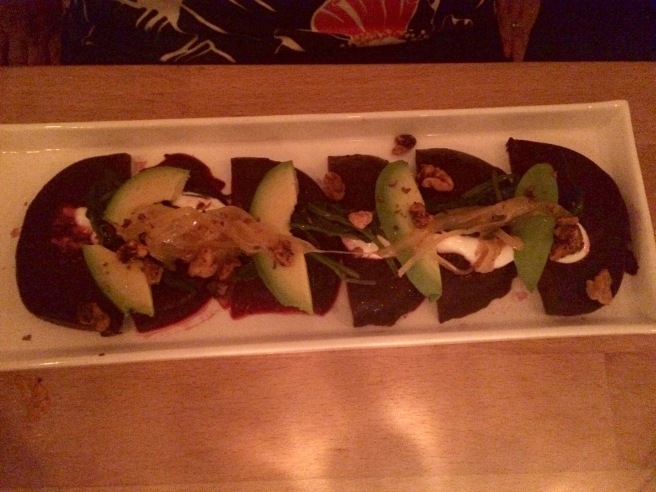 Ensalada de Betabel, translated to “beet salad,” was not super Mexican, but seemed very appropriate for a downtown Manhattan restaurant and tasty. The salad was a good mix of textures—the meaty grilled beets, soft goat cheese spread, creamy avocado, crunchy caramelized nuts, crunchy spinach leaves, and chewy radicchio. The beets were also the right temperature; often, kitchens serve beets that are ice-cold, which I think dilutes the sweet flavor of the beets, but here they were served room temperature.

The Quesos Flameados, or melted Chihuahua cheese baked casseroles, was also a great dish. This dish is hot in comparison to the others, and made for a nice change from the previously cold appetizers. The cheese was cooked in a cute little cast iron skillet along with some onions for both flavor and texture. The cheese ended up all melted and crusty along the outer edges. It was served with hand-pressed tortillas to scoop up the cheesy goodness, almost like a deconstructed cheese quesadilla. 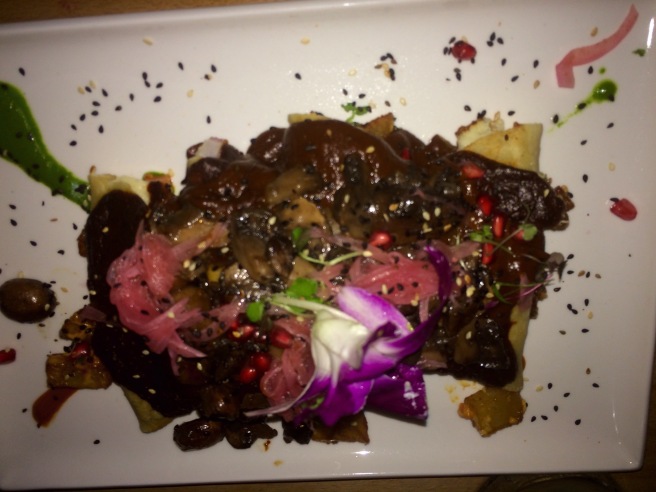 The second course Enchiladas Callejeras—“street style” enchiladas—were stuffed with panela cheese that has a meaty texture and much higher melting temperature. Therefore, the cheese maintained its shape and very much stood up to the rest of the dish. The enchiladas were smothered in a mouth-watering mole sauce, and rested atop adobo fried potatoes. The mole was very earthy, with sweetness and a slight fruitiness that made it a nice contrast to the spicy, smoky potatoes. The potatoes on their own reminded me of a dish I had when I was in Spain called papas bravas, typically served as a tapas dish in Spanish restaurants that consists of fried potatoes garnished with a spicy tomato sauce or creamy aioli. We requested mushrooms instead of one of the meats available on the menu and they were cooked perfectly and formed a semi-permeable layer between the mole sauce and the enchiladas.

The fish tacos, Tacos de Pescada Baja Style, were also made with sea bass, and the dish was super crispy from the beer batter. There were three big tacos tightly wrapped with flour tortilla filled to the brim with hot fish and a crunchy, sweet and tangy jicama slaw. There was also a creamy and spicy aioli garnish that was tasty, but the taco was already so moist that it wasn’t even needed.

The meal’s final entree was Barbacoa de Arrachera. The barbacoa consisted of skirt steak braised with banana leaves, tequila, Mexican beer, oregano and salsa verde. Using skirt steak was an unusual, but smart choice–it’s a cheaper cut of meat, but the other ingredients elevate it to the fine dining level. The meat was smoky and slightly sweet from the banana leaves, moist from the beer, woodsy and deep flavors from the oregano and tequila, a nice pop of tanginess from the salsa, and fall apart tender. It was garnished with lime and a duo of sauces. The presentation was clean with the meat served in a big bowl along with some hand-pressed tortillas.

At this point, we were all pretty full, but who can say no to dessert? The Flan Napolitano was unbelievably creamy and the custard was set, with the spoon cutting through it like a panna cotta. It was sweet and tangy from the cream cheese, with a layer dulce de leche caramel and topped with some toasted walnuts flavored with cinnamon. The plate also had a raspberry garnish.

The Churros, which are always a personal favorite of mine, were fried perfectly–crispy on the outside and still eggy in the middle–and lightly dusted with cinnamon. The lack of sugar on the Churros was actually a welcome surprise, since the other desserts were uber sweet. They were served with dark chocolate and dulce de leche dipping sauces. Only thing I would change was I wish there was a little more sauce–I’d drink it from the container lol.

Last, but certainly not least, was the Pastel de Tres Leches (aka Tres Leches Cake). The cake was, as expected, super moist from the three kinds of milk–cream, evaporated milk, and condensed milk–and the sponge was slightly grainy. It’s a classic Mexican dessert and this one was a great take on it, especially with the great presentation. The plate was garnished with a small cup of milk. Not only was the white milk in sharp contrast to the dark plate, but I also love when food is garnished with what’s in it! A quality I share with Ina Garten, the Barefoot Contessa. 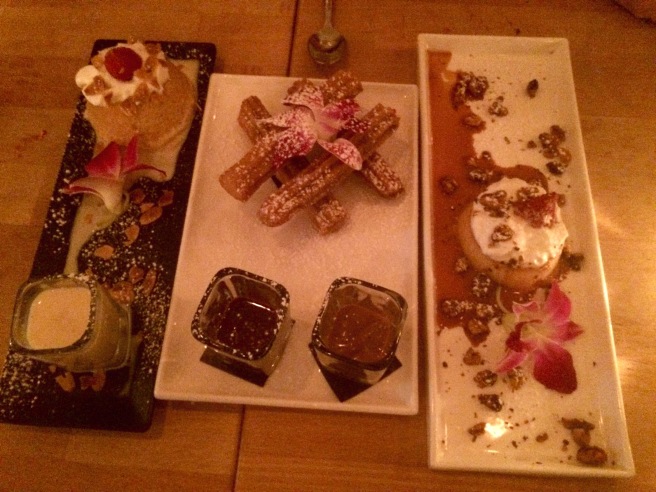 So if you’re in the mood for some delicious Mexican food in NYC, head downtown to La Loteria, but make sure you’re hungry! Everything is fresh and tasty, and it’s always service with a smile. Dustin, the manager, took such great care of us and really made the whole night special. Can’t wait to come back for Happy Hour and dinner again.

One thought on “Mouthwatering Mexican in the West Village”